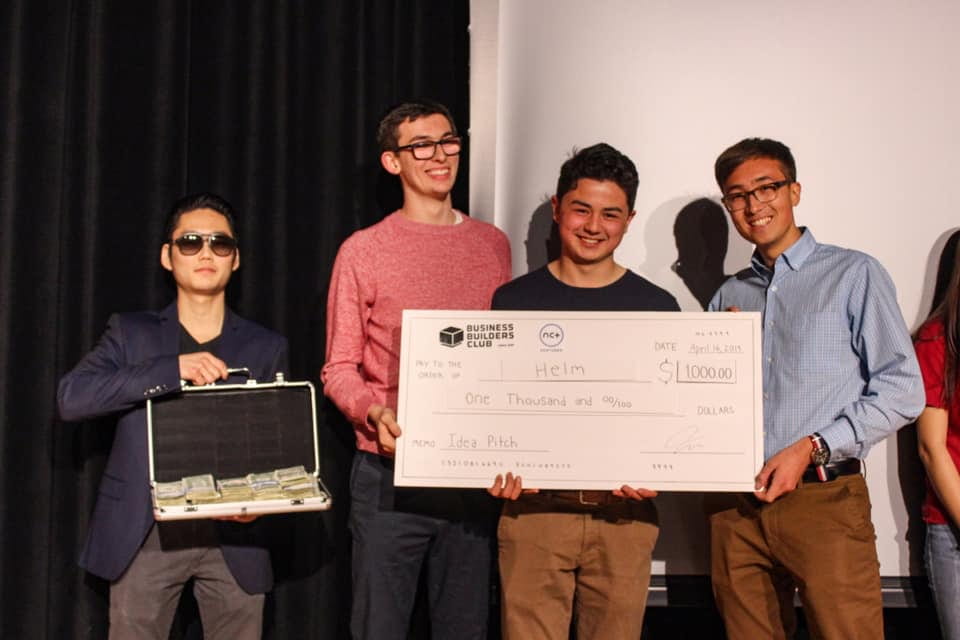 To end the eventful 2018-2019 school year, last April, The Business Builders hosted their annual 2019 Idea Pitch. Nine teams pitched in front of four Columbus entrepreneurs to try and win the grand prize of $1000. We were fortunate to bring in some of the best new and veteran talent in the Columbus area, including Rich Langdale, Falon Donohue, Nafis Azad, and David Butcher. After hearing several investable pitches and some fantastic ideas, the four judges had to decide which three pitches were going to take home the cash. Helm, a user interface that offers challenge based hiring in order to redefine the hiring process, ended up on top with 1st place and a brief case of 1000 $1 bills. Paper, an app that would offer an easier medium to invest in debt, bonds, and commercial paper, took home 2nd place with $300. And 1-1-9, a platform that would bridge the communication gap between the chronically ill and everyday bystanders, took home 3rd place with $200. Almost 6 months later and we’re here to find out where exactly these ideas and businesses are now and how much help winning the Idea Pitch actually brought to these businesses.

When a company goes to hire a candidate, they hire who they believe is most qualified, based on their interview, resume, etc.. Helm is trying to redefine the definition of what makes a candidate qualified for a job. Rather than focus on a degree, a resume, or a GPA, Helm places focus on the skills required to actually be good at whatever specific job you are trying to get. They take a more direct approach to hiring, instead of leaving a resume to make the decision. What Helm is building is a scalable challenge based system that can be used by multiple companies in order to acquire their next best employee.

Helm started in October of 2018 as an idea that was loosely revolved around social mobility. They continued to identify problems within the issue of social mobility and realized that a key contaminant was the hiring process. So Helm had successfully defined their problem, but they now had to redefine their solution. Throughout the school year, Helm used the Hult Prize as their guiding light for their business idea. When they made it to Regionals in San Francisco, it pushed them to really start cracking down, do some research, and formulate their idea completely before the Hult deadline. Hult was a great learning experience and gave them valuable feedback, but they decided that if they were to continue with Helm, they needed to actually start building. With the help and guidance of Jeff Schumann, Helm decided to pivot their approach to a more user based experience. That was their differentiator. They continued to acquire potential partners and built a loosely based platform in order to prepare for the Business Builder’s Idea Pitch.

What Idea Pitch provided was, for starters, a chance to pitch. No matter what type of idea or business you have, having an opportunity to pitch is always a win and is a fantastic way to improve your business. The second benefit of Idea Pitch was the exposure. They were able to network with the judges, get feedback on what they needed to do next, and also create lasting relationships that could eventually turn into partnerships. The third benefit of Idea Pitch was the validation received from actually winning something and being motivated to carry on. Money is always helpful, but it is often the more meaningful things such as those listed above that really launches an idea to the next level.

That summer after Idea Pitch, after receiving validation and having the connections to carry them forward, Helm put their heads together and decided that they were going to build a platform by the end of the summer. They encountered a problem with partner and user acquisition. After debating with people such as Jeff Schumann, they decided to go directly after the user, instead of worrying about who their partners are. They wanted to create value for the user and expand from there. The mindset was that it is better to have 100 users that love the platform than 1000 users that think it is mediocre. Over the summer Helm perfected their user base, made sure that the platform offered more value than just hiring to the user, and made sure that the user would keep coming back. Helm launched their Beta on Labor Day which was a huge milestone for the company. Their next steps are to get user feedback, specifically CSE majors, in order to figure out what works and optimize the user experience. After further validation, they will start to reach out to potential partners for skills they would look for in a candidate, create additional challenges that match those skills, and supply the results of potential qualified candidates back to the partner. Helm is currently on campus, looking for validation, so keep an eye out for Helm passing out free Mission Coffee along with stickers and flyers. Go create an account today and give it a try!

1-1-9 is a platform that would allow chronic illness patients to be able to alert and communicate with bystanders about what is actually happening in a medical instance. Instead of always resorting to calling 9-1-1, 1-1-9 supplies a series of rapid yes or no questions based on the user's medical history, that help the bystander figure out what kind of attention the user needs and what action the bystander should take. By going from broad to extremely specific questions, the platform enables the bystander to identify the problem of the user in less than 1 minute. Whether it prompts the bystander to call 9-1-1 or to attend to the patient until their episode is over, 1-1-9 tries to make the life of a chronic illness patient just a little less difficult than it already is.

Jen Schlegel is a Biomedical Engineering student who suffers from 13 various chronic illnesses and birth defects. 1-1-9 originated in Jen’s head a couple years back when she would encounter the problem of people always wanting to call an ambulance anytime a chronic illness patient had an episode, whether the patient needed the ambulance or not. It received validation at the Wexner Medical Center Brain Health Hack where it was a winning contestant. This victory led Jen to pitch in Business Builder’s 2019 Idea Pitch. What Idea Pitch did for Jen and 1-1-9 was mainly validation and exposure. Idea Pitch opened all kinds of new doors for Jen, who hadn’t been very familiar with the entrepreneurial world as an engineering student. Idea Pitch set off a series of chain reactions by leading Jen to Give Back Hack which allowed her to join a business accelerator for social entrepreneurship called the SEA Change Social Enterprise Accelerator. All of these business world connections stemmed from Idea Pitch. As for what Jen did with her $200 in prize money, she actually still has it and has been using her stack of 200 $1 bills as a form of visual motivation when she finds herself in times of despair.

Give Back Hack expanded Jen’s Ideas beyond the OSU community and led her to apply to the SEA Change Accelerator. The Social Enterprise Accelerator allowed Jen to work in an environment full of other social entrepreneurs. She was able to acquire feedback and learn about certain business model fundamentals such as how to make a good slide deck and what investors want to hear in a pitch.

Currently Jen is working on testing 1-1-9’s riskiest assumptions in order to fill any holes in her business model. Jen is juggling with ideas such as QR codes, voice assist devices, bracelets, bio-metrics, etc.. She has also been conducting surveys to acquire validation for her business idea. The largest concern at the moment is being able to determine if, in that moment of panic, bystanders will listen to 1-1-9’s interface rather than just calling 9-1-1. Not everyone is familiar with the struggles that chronic illness patients deal with on a daily basis. Jen is taking that challenge head on and not letting anything slow her down. Keep an eye out for 1-1-9 and never forget to think of those less fortunate than you.

Paper unfortunately never left the ideation stage. Not all ideas come to fruition, but it is the art of having an idea and being willing to pitch it that brings value. If you have an idea, share it with people, put something together, and see where that idea takes you.

Whether it’s money your after or just the validation and experience that can be gained from pitching an idea, when you put yourself out there, you learn a lot about yourself and about the idea you are pitching. You begin to realize where your faults are and start to ask the right questions. The Idea Pitch has been a Business Builder’s tradition all the way back to its founding years and it has continued to be a tradition due to the value that it brings to students and their ideas. Come climb with us and you might just find yourself ending up at the 2020 Idea Pitch!