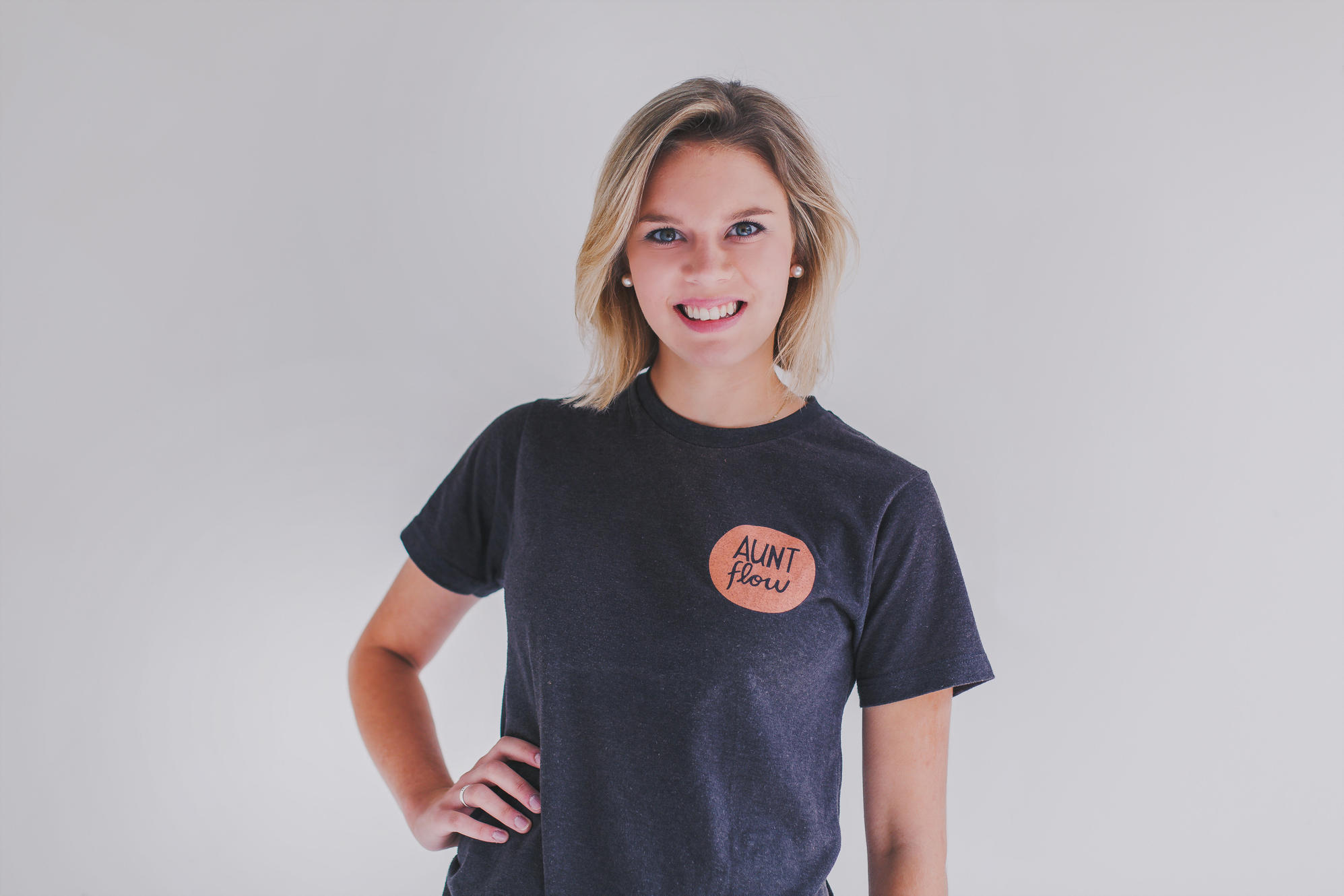 To keep the year going on the right track for week #2 of the Business Builder’s jam-packed year, Claire Coder came in to give us another raw, genuine, and gritty story of exactly what it is like to be a practicing entrepreneur. Claire is an Ohio State dropout, she has been written about in magazines across the nation, including Forbes, and she is the founder and CEO of Aunt Flow. Her mission is to provide menstrual products for the masses.

“How can we create a sustainable solution to ensure everyone has access to menstrual products when they need them.”

When Claire was 7 years old, she started her first lemonade stand. It was a cool way to make money, so one sunny day in Toledo, Ohio, Claire and her friend decided to give it a try. As they were doing so, she noticed that there were a bunch of construction workers working at a house across the street. Coincidentally enough for the mind of a child, they reminded her of her father. But Claire had never seen her dad drink lemonade before, but what she had seen her dad drink, was beer. So off Claire went to her father’s beer fridge and soon enough, she had hand delivered and hand sold $5 beer cans to the sweaty construction workers across the street, making the first $25 of her life. The $25 soon turned into $13 when her father made her pay him back for the beer she stole, but nonetheless, it was a valuable experience. What she learned from that experience was that first, you need to have customers, then you need to understand your customers, next you need to know that service matters, and finally you need to remember that you can never forget about the cost of goods sold.

“As you continue to build your companies and develop your journey, really reach back to even the earliest times because those are all formative years. Every challenge that you face.”

Claire didn’t have it easy growing up. Her family was not very well off, her mom struggled with alcoholism, she went blind for an entire year of her life when she was in fourth grade, and all her parents ever told her about success was that you have to have a 4.0 and that you have to get a college degree. Only thing was that Claire was not very good at school and had horrible test anxiety. But Claire being Claire wasn’t going to let that bring her down. She had figured out that school wasn’t a determining factor of her intelligence, and she knew that she was pretty damn good at selling things. So in highschool, she decided to start making buttons using a button maker that was given to her by her grandma. She started selling them to her friends, and local businesses, and as she grew in size, she eventually sold her first large order to Honey Baked Ham. By her senior year of highschool, she became a topseller on Etsy and had done over a half a million dollars in sales. In order to achieve this impressive feat, Claire had to hustle her ass off. She listened to her parents, keeping her creative liberties in mind, and used the money from her business to pay all her friends to do her homework for her. She would pay all her teachers to lie to her parents about class attendance and even paid her guidance counselor $25 every time she would write Claire a pass to leave school to go to a business meeting. Sounds insane, but the reason she was doing all of this was because she wanted to get out.

“My motivation was that I wanted to get out. My home life wasn’t the best. I didn’t land on a whole bunch of money. My parent’s relationship was not easy to watch. And I could get a job at Target, but it would not get me a car fast enough to get out fast enough. So I had to find alternative ways to get out. So I hustled my ass off.”

She pursued her motive of getting out by buying her first car. It was a source of freedom for Claire and meant a lot to her, as she had worked relentlessly to acquire it. She ended up driving the car into the ground because she would street race on the weekends as an additional side hustle (using the car’s turbo engine as a slick advantage), but regardless of the fact, the possession of the car was a pivot point in Claire's life. She graduated top of her class with a 4.2, all from paying her colleagues to get her through highschool (imagine that) and had gotten a 16 on the ACT after taking it five times. She gave into her parents demands and ended up attending The Ohio State University. Only thing, was that she hated it. She hated living with a roommate, she hated not having a car, she hated drinking, she hated football, and she couldn’t join the band. Lost and confused, she spent the first four months lonely and depressed. She started drinking, and hit an all time low after passing out at a party. She had a wakeup call and wanted to get away from the Ohio State scene so she decided to attend a StartUp weekend in downtown Columbus. It was at that StartUp weekend where she got an unexpected period. Miserable and with nothing to assist her, the idea for her business popped into her head. How can we create a sustainable solution to ensure everyone has access to menstrual products when they need them? And that question is what breeded Aunt Flow.

“Really focus on your core and why you’re starting your company. And think about your network that’s either building you up or bringing you down.”

So with new vision and new motivation, Claire immediately dropped out of college, leased an apartment and started to build her network. She had no friends from college and didn’t know anyone from Columbus, so Claire started connecting with people through LinkedIn and Twitter, eventually obtaining a solid group of Columbus advocates. Times were rough. Claire practically starved to get by, with her only meal a day being at the several waitress jobs she had picked up. And after working 8 hours on her feet, she would come home every night and work on her startup. But what kept Claire motivated was the vision she had in her brain of what she knew she was working to achieve, and she knew that vision was an avenue out. She spent a lot of nights crying and wanting to give up, but she remained resilient. She raised $25,000 to fund her MVP and started selling tampons and pads direct to consumer. This sparked 3 months of $20,000 of recurring revenue, however, Claires good luck ran out quickly and she was back to ground zero. She wanted to quit, but what kept her going was her why. She kept going back to the thing that mattered most to her about her business, and that was providing menstrual products for the masses. She was able to use a connection she had made from networking, to successfully allocate $5,000 from Harvard to purchase tampons. She was able to say that Harvard was her first sale, and used that account to work on her business and see what it actually needed in order to be successful. She hired a friend of hers to help sell the heck out of tampons and they ended up doing a quarter million dollars in sales, selling non-applicator tampons to businesses and schools. They spent no money on marketing and focused solely on customer experience, using only word of mouth sales. They used that traction to raise 1.5 million dollars and are now found in hundreds of businesses and schools across the United States.

One thing thing that Claire continued to mention during her meeting with the Business Builders was the value of networking and how important transparent networking is. This week, thanks to the one and only Rob Nicholson, The Business Builders were able to spice up the weekly meeting’s ‘Take the Floor’ activity by offering $100 in cold hard cash to the person that could give the best elevator pitch. Seven people took the floor (usually we only allow five, but money was on the line) to say to the audience what they would say if they had 60 seconds in an elevator with Mark Zuckerberg. Some pitches were good, some pitches needed work, but all around, the courage and passion of the seven aspiring entrepreneurs was there. In the final vote it came down to Matt’s Alkaline Skate Company and Christian’s CP’s Chimichurri. Chrisitan took home the dough. Every week, as Business Builder’s, we have five people take the floor to give a one minute elevator pitch. We do this because it encompasses the entrepreneurial mindset that one has to have to be successful in the entrepreneurial world. Whether you’re Claire Coder or the next Mark Zuckerberg, networking and transparency are absolutely fundamental to being successful. As Business Builders, this club isn’t just about listening to speakers and eating pizza. It’s about using that knowledge being given to you and interacting with those around you to reach a common goal. It takes a lot of courage to stand in front of a crowd of over 100 people and there's no better place to do it than at the cornerstone of entrepreneurship at Ohio State. Be passionate about your idea and be willing to share it with others.