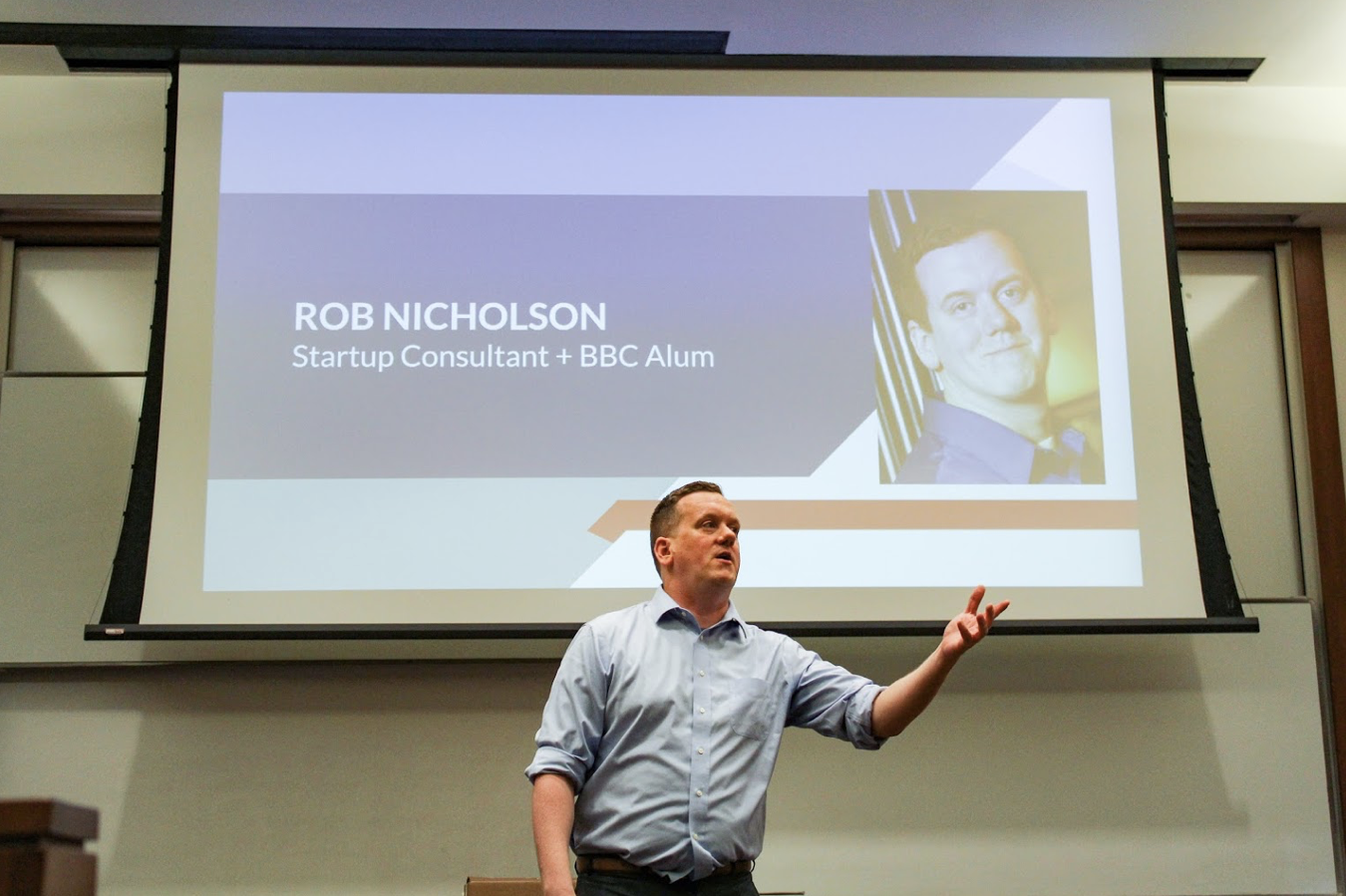 This past week Rob Nicholson came in to kickoff the anticipated and jam-packed year for the Business Builders, and boy did he do it justice. Rob is an entrepreneurship and startup guru who has successfully founded and owned several businesses. He single handedly saved his and his mother’s handicap services business at a time when his mother was fighting breast cancer. He then went on to graduate from The Ohio State University in just 3 years and served as the Business Builders Club President in his final year. Rob is, as some would call it, a BBC Mafia man at heart. His love for the organization is rooted in our rich history, life changing experiences and opportunities, and most importantly, in our family of Business Builder’s alum who have contributed greatly in making the organization what it is today. As Business Builders, we truly do stand on the shoulders of giants and Rob is a perfect example of that.

Rob didn’t have it easy growing up as a kid and had to learn how to survive on his own faster than most people have to learn how to drive a car. He grew up as a middle child in a family of 8 and lived in a small house with only one bathroom. His father had one rule, when adulthood came around, you were on your own. He didn’t want to go to war and he couldn’t get pregnant so the paths of his older siblings were not an option. He didn’t know how to buy a house, he couldn’t afford to go to college, and the only advice his parents had was that there was this awesome place called the library (this was before the internet of course). So off to the library Rob went. He learned how buying a house worked, and after a little persistence and a lot of thought, he ended up in a shanty home in a nice neighborhood. He fixed up two units, used the money that he had to buy a portable trailer and rented out the duplex to make money from it. With that money, he flipped properties and developed several revenue streams. At the height of it all, he made a couple million dollars and was confident that he had made it.

“Students have a tremendous amount of power. What you want matters to the university. If you want things and you speak up, you can get them. You just need to learn the channels, the tone, the style, and of course, what you want.”

During the meeting, Rob performed his famous money on the wall activity. He pulled a student from the crowd and had her jump as high as she could. He then placed money higher than where she had touched and told her to try and grab it. If she succeeded, she had to jump higher. Of course, this became more and more challenging as the money was further out of reach. The activity ended when a taller student came to help. For working together, they split the prize. One of the lessons learned from Rob’s famous activity is that with the right motivation we can often do more than we thought possible. That is what entrepreneurship is all about. Failing, failing again, failing better, and having the right motivation to work your way up the mountain even when the end doesn’t seem near. Furthermore, having climbing partners along the way eases the challenges faced when climbing a mountain. You have to rely on other people to help you in entrepreneurship. Nobody starts a company alone. You need people by your side. You need a network to turn to, advice and experience to be learned, a taller person to get the money off the wall. The Business Builders Club is that climbing partner.

“There’s only one problem with getting paid by the hour. You’re trading your time for money. I want to be earning money while I’m sleeping. I want to be generating wealth.”

This was Rob’s 10th year speaking on week 1. Every year he has watched students come to Business Builders, dedicate their time, pursue their passion, and live their dreams. To prove this, Rob was kind enough to give out 50 letters, written by BBC mafia (alum) that talk about how this club changed his/her life. The first 50 members to sign-up after the meeting received a letter.

“It’s these people, in these seats, with their dreams, visions, and passions. Business Builders are not ordinary!”

You are not ordinary, and the Business Builders Club is here to take you from ideation to impact. Any major, any idea, or no idea at all. If you want to make a positive impact on your life and change your community, then this is the club for you. Come climb with us!