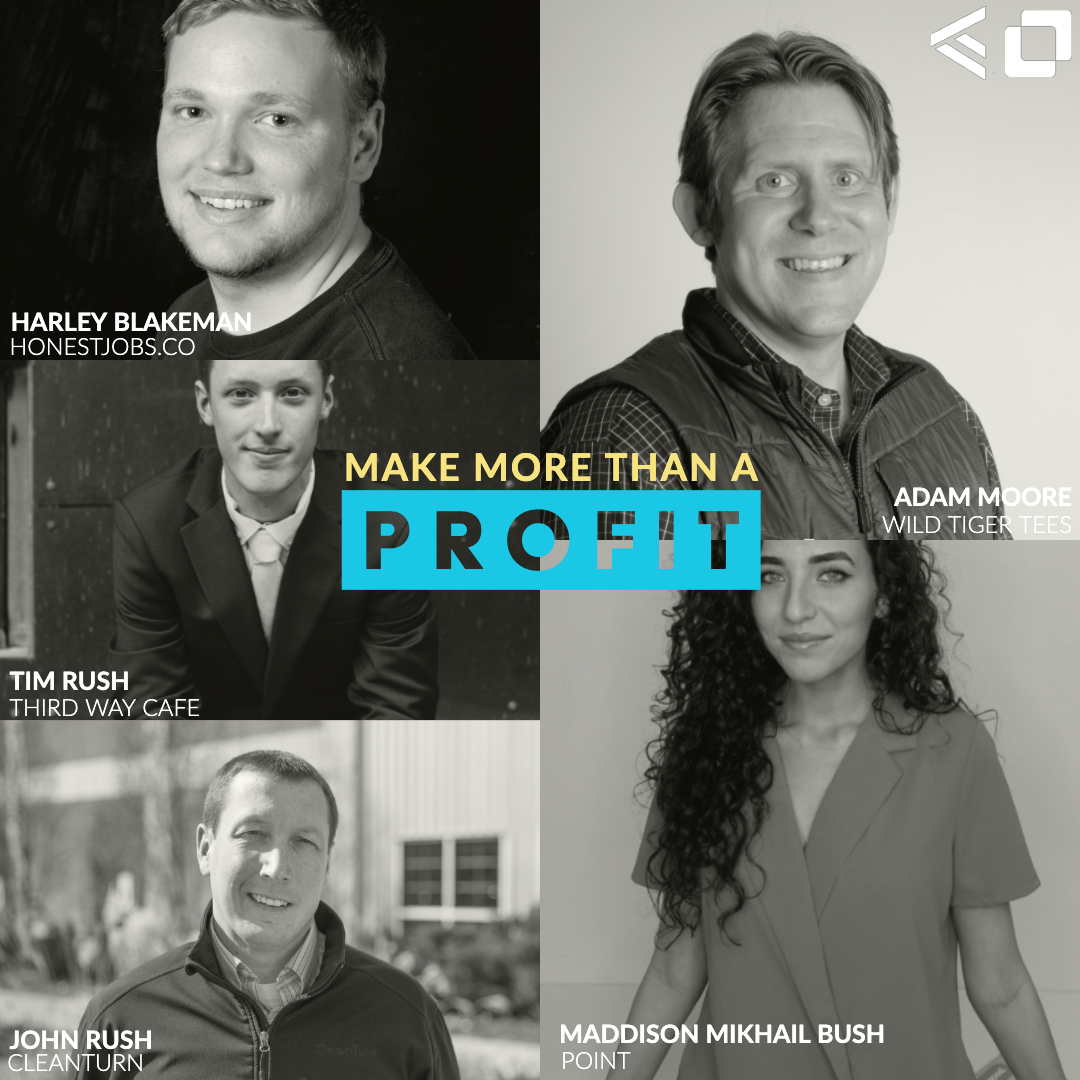 To close off the eventful Fall Semester of 2019, The Business Builders decided to mix things up a little and collaborate with APTE (Alleviating Poverty Through Entrepreneurship). Instead of being focused on making loads of money and living glamorous lives of wealth and fame (this is a joke people), this meeting was focused on entrepreneurship that prioritizes social change rather than monetary value. APTE was able to put together a panel consisting of some of the hottest social entrepreneurs relevant in the Columbus area. The panel consisted of Harley Blakeman, Tim Rush, John Rush, Adam Morris, and Maddison Mikhail Bush. Each of these social entrepreneurs has a unique background and a unique way in how they are impacting social change in the communities they work in. Below are the ins and outs of the “meat and potatoes” of the LAST Business Builders Meeting of the semester. Enjoy!

John is the founder of Cleanturn, a company who gives second chances to people who have traveled down the wrong path and are trying to find their way again. John didn’t have it easy growing up. His mom was a recovering addict and he lived with his dad in a trailer park with a cardboard box as a dining room table. Although he experienced poverty growing up, he never knew he was poor. He and his dad would regularly visit the homeless shelter and the nursing home, giving what they could to support those less fortunate than them. This exposed John to crucial life problems such as poverty and old age, and got him thinking about those issues early on in his life. He ended up raising his 8 kids on the West Side of Chicago after serving in the Marine Corps. He worked with Vice Lords, a local gang from Chicago’s West Side, and was able to start rubbing shoulders with members of the local community and making a difference. No one wanted to hire the people he was trying to work with, so he decided to take matters into his own hands. He used the skills they had to create a company revolving around those skills. The result was a painting company. And from that company, John was able to get a glimpse of how a service based company could be leveraged to provide a platform for individuals trying to reintegrate back into society in a positive way. From that idea, Cleanturn was born.

Harley Blakeman is the founder of Honestjobs.co, a tech company that works with previously incarcerated individuals in order to find them a job at companies around the country. A previous drug addict who sobered up, graduated top of his class, yet still couldn’t find a job, he became passionate about solving the negative stigmas behind past incarcerations and giving people a second chance. Maddison Mikhail Bush is the founder of Point, an app that acts as a hub for volunteering opportunities around you. She was motivated by the lack of good that can be done from your phone and wanted to give nonprofits the same AI benefits that so many for-profit companies have. Adam Morris is the founder of Wild Tiger Tees, a t-shirt company that employs youth experiencing homelessness and teaches them the art of screen printing. He found his passion in volunteering and decided to turn that passion and impact into a lifestyle. Tim Rush is the founder of Third Way Cafe. He found his passion through the idea of a community being able to come together to do good and has modeled his coffee shop off of that belief.

The Panel’s Top Pieces of Knowledge

There are two ends to the spectrum of Social Entrepreneurship. One extreme is nonprofit organizations, entirely dependent on grants and public subsidies, that are causing great impact on society. The other end of the spectrum is for-profit businesses that have strong missions and strong values and use their power and money to cause a social impact. Social Entrepreneurship falls in a very gray area and everyone has their interpretations and opinions on what companies/businesses are considered social enterprises. The underlying theme that is present in all social enterprises is the result of social change. As Business Builders, we strive off the importance of problem solving. Social Entrepreneurship is just that. Don’t just make a company, make a company that inspires good in the world around us. That is how you find purpose.